Once upon the Tracks of Mumbai - A reivew

Railway tracks and India go back a long way. We have depicted the railways as being a catalyst in many of our movies, the ones that come to mind instantly being "Jab We Met". Of course there are many, many more that can be pulled out if one really wants to remember.

At the same time, I wonder how many books are written on the familiar settings of the enormous presence in our country called the Railways! And what better place to have the story than Mumbai, the 'city that never sleeps', where the Railways contribute to the economy and the lifestyle.

Allow me, ladies and gents, to put before you, in the usual Nirvana style, yet another book I have been fortunate to get my hands on Once Upon the Tracks of Mumbai by Rishi Vohra

First things first, I got an autographed book (Yay!!) The cover has two pretty faces over the railway line. While this is definitely the settings, do not be misled into thinking that this is all there is to the book! The book goes into much more shades of grey, black and white than you would assume from the cover.

﻿
"Autistic. psychotic. Schizophrenic....". For the twenty four years of his life, these are some of the words "they" have used to describe Babloo. He knows his family agrees with "them" and he senses that he is different. He doesn't hate people; he just cannot find the right way to connect with anyone. Vandana is the only exception. What can he do to make himself worthy of her?

Babloo finds simple pleasures in small things, A random twist of fate along these familiar train tracks brings Babloo face to face with the harsh reality of escalating crime in the local trains of Mumbai, and shakes him out of his apathy.

Also something that was pleasant in the writing was the sketch of the city I love so much - Mumbai in all its glory, and sometimes, the coldness of the city too.
"No one understood the dual existence of 'him' and me that made me the person I am. Only the railway tracks that ran along outside my bedroom window knew the both of us individually. The endless, idle wooden planks connected by durable steel had formed a fine segregation between my fantasy and reality."

For some more excerpts, do visit this site
Posted by Nirvana at 4:05 PM 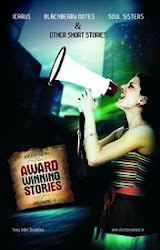